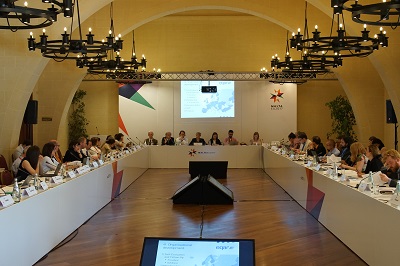 The General Assembly decides on the budget, approves the accounts, elects the Executive Board and Appeals Committee and approves the Register Committee.

All signatory countries of the Bologna Process can become Governmental Members of the Association. For the full list of members please view EQAR members.

The Founding Members and the Social Partner Members constitute the group of Non-governmental Members.

The Founding Members are the E4 Group (ENQA, ESU, EUA, EURASHE) which founded EQAR following the mandate given by European Ministers of Education.

The consultative members of the Bologna Follow-Up Group (BFUG) that represent the interests of employers or employees can become Social Partner Members. These are currently BUSINESSEUROPE and Education International.

The Founding Members and the Social Partner Members constitute the group of Non-governmental Members.

All signatory countries of the Bologna Process can become Governmental Member of EQAR.

At present, there are four permanent observers at the GA: the European Commission, the Bologna Secretariat, the Council of Europe and UNESCO-CEPES. They do not have voting rights.

An overview of past General Assemblies: 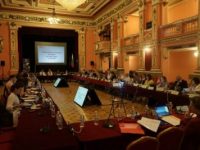 EQAR’s 14th General Assembly (GA) was held in Sofia on 23 April, in conjunction with the BFUG meeting on 24-25 April.

Hosted by the Bulgarian Ministry of Education and Science, representatives of EQAR Members convened to review, discuss and adopt the EQAR Strategy 2018-2022 as well as the message to the EHEA Paris Ministerial conference that will take place on 24-25 May.

Yearly recurring agenda items such as the annual accounts, the budget, the workplan and the annual report were presented by the Board and considered and approved by the General Assembly. Other topics included a progress report on the Database of External Quality Assurance results (DEQAR) as well as an Analysis of Register Committee Decisions.

During a Thematic Session, two keynote presentations were given, followed by lively discussions: 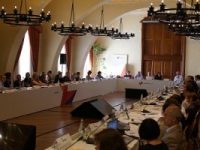 EQAR members convened for their 13th General Assembly, hosted by the Maltese Presidency of the Council of the EU and in conjunction with the BFUG meeting on 24-25 May.

Karl Dittrich was unanimously elected as EQAR President with a mandate from 1 July 2017 to 30 June 2020. He will chair the Executive Board as well as the Register Committee, represent EQAR externally and ensure coherence in the work of the EQAR bodies.

Appointing an EQAR President was one of the recommendations in EQAR’s external evaluation of 2011 “the General Assembly should appoint a high profile, independent President capable of raising the visibility and promoting the benefits of EQAR with key stakeholders”.  Following up on decisions taken at the GA in Oslo on 25 November 2016, as well as the subsequent statutory changes by the General Assembly of 12 April 2017, EQAR members were invited to elect an EQAR president based on a proposal by the Selection Committee.

The Selection Committee was composed by representatives of Governmental Members (4), Founding Members (2), Social Partner Member (1), the Executive Board (2) and the Register Committee (2).

After issuing a Call for candidates, the Selection Committee received 14 applications from high level applicants and interviewed 6 of them. Based on the motivation letters, CVs and the interview, the Selection Committee was able to find a consensus that one candidate best matched all elements mentioned in the Call for Candidates – independence, senior leadership experience, good knowledge of quality assurance and higher education policies at the European level, ability to work with different actors and stakeholders, and excellent command of English – and therefore agreed to propose one candidate, Karl Dittrich, to the General Assembly (GA).

As of 1 July 2017, the Executive Board will assume the following functions: 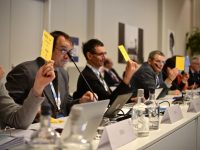 Highlight: recommendations from the self-evaluation

EQAR’s 10th General Assembly was held in Amsterdam on 7 March, hosted by the Dutch EU Presidency, in conjunction with the BFUG meeting on 7-8 March.

Representatives of 38 EQAR members convened to review and adopt, among others, the EQAR Self-Evaluation Report as well as a number of recommendations directly resulting from the self-evaluation process.

Apart from recommendations on how to further improve or expand current practices, two distinct objectives came out of the self-evaluation exercise and were directly taken forward into the Work Plan:

To study the feasibility of a database of higher education institutions and programmes that have been subject to quality assurance by registered agencies.

To establish or clarify the position of a president in order to raise the visibility of EQAR and to enhance stability and leadership internally.

EQAR will prepare concrete, operational proposals on both topics which will then be discussed at the Members Dialogue in Oslo in November 2016. 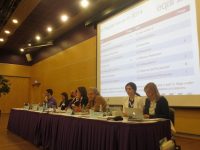 The General Assembly reviewed and adopted the Message to the Yerevan Ministerial Conference which highlights some of EQAR’s activities as well as the main developments in cross-border quality assurance since the last ministerial meeting in 2012 (Bucharest) and offers a number of recommendations for the Yerevan Communiqué.

Members of the GA took note of the “Use and Interpretation of the ESG”, a policy document prepared by the Register Committee, based on the current “Practices and Interpretations”. Likewise linked to the revised ESG, the General Assembly considered a number of amendments to the “Procedures for Applications” and approved to extend the current term of the Register Committee by one year to ensure a smooth and stable transition to the revised ESG. These documents will be published after the Yerevan Ministerial Conference in May.

The Annual Report 2014, including the Report of the Register Committee, was presented to the General Assembly and will be published shortly. 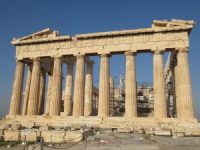 EQAR members convened in Athens for the 8th General Assembly of the organisation. The Annual Report 2013, including the Report of the Register Committee, was presented at the event and will be published on the EQAR website shortly.

The General Assembly approved the Work Plan 2014/215 of which the RIQAA project (Recognising International Quality Assurance Activity in the EHEA) is one of the main activities for 2014. The final dissemination conference of the project (and Members’ Dialogue) will take place in Rome in September 2014.

EQAR is also planning to co-organise regional peer-learning events on cross-border quality assurance in cooperation with national ministries. Ministries interested in co-hosting such an event are kindly requested to contact the EQAR Secretariat.

The General Assembly elected the following Executive Board for a two-year mandate:

A special word of thanks was given to Lesley Wilson who served on the EQAR Board since its foundation as well as to the other two outgoing board members Stefan Delplace and Allan Päll. 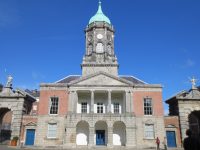 Highlight: adoption of the Strategic Plan for the years 2013-2017

At EQAR’s 7th General Assembly, held at Dublin Castle on 13 March 2013, members adopted the Strategic Plan for the years 2013-2017. This is an important step to strengthen EQAR’s strategic role, as was recommended by the international expert panel that reviewed EQAR in 2011.

The EQAR Annual Report 2012 (print version) was presented at the General Assembly, including a Report by the Register Committee.

As of 1 April 2013, the Executive Board will assume the following functions, according to the agreed annual rotation: 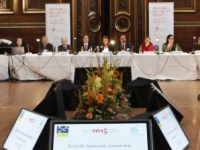 EQAR’s 6th General Assembly was held in two parts in conjunction with the two Bologna Follow-Up Group (BFUG) meetings during the Danish EU Presidency. During the first part, on 17 January 2012, EQAR members discussed EQAR’s strategic priorities and follow-up to the External Evaluation.

On 20 March 2012, EQAR members convened for the second part of the General Assembly.

The General Assembly elected a new Executive Board for a two-year mandate. The following candidates were elected and will assume the following functions as of 1 April 2012, according to the agreed annual rotation:

Representatives of Turkey, who joined EQAR as Governmental Member right before the General Assembly, as well as Croatia, Latvia and Montenegro, who had signed up for governmental membership already last year, were warmly welcomed at their first General Assembly. 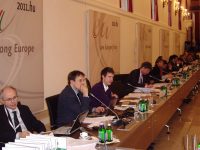 EQAR members convened for their fifth General Assembly in Gödöllő on 18 March 2011. The main item on the agenda was the draft Self-Evaluation Report for the External Evaluation of EQAR. Members shared their comments and reflections on the report in a very engaging discussion. The GA was also informed about the composition of the Evaluation Panel that will carry out the review.

As of 1 April 2011, the Executive Board will assume the following functions, according to the agreed annual rotation:

Croatia, Montenegro and Turkey were present at the GA as observers and announced that their governments were considering Governmental Membership of EQAR. 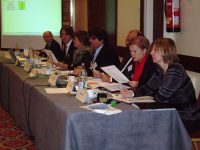 4th General Assembly, Madrid EQAR members convened in Madrid on 19 February 2010 for the fourth General Assembly of the association. A new Executive Board was elected for a 2-year mandate commencing as of 1 March 2010.

Another important milestone was the approval of the Initial Plans for the External Evaluation of EQAR. Initial discussions on this subject had already started in September 2009 at the third General Assembly. 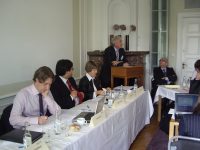 Bryan McMahon expressed that the RC was pleased with the keen interest shown at the last GA for its work. While emphasising the utmost importance of transparency and accountability, he recalled two other important principles, namely confidentiality granted to applicants and the independence of the Register Committee. He explained that the Register Committee worked on the basis of the European Standards and Guidelines (ESG) as well as the Procedures for Applications, which were adopted in consultation with the GA. The Committee was committed to ensure that all applications are considered fairly and the available evidence is weighed carefully and rigorously.

Colin Tück, acting director of EQAR, presented the Interim Report on the Plan of Work summarising the goals and activities concerned with the management of the register, as well as the communication and external relations.

The General Assembly discussed the initial plans for the External Evaluation of EQAR. As foreseen by the London Communiqué (2007) and endorsed in the Leuven/Louvain-La-Neuve Communiqué (2009), EQAR should be evaluated externally after two years of operation.

The European Commission presented the key points of their progress report on Quality Assurance and invited everyone, including other stakeholders, to consult the report and reflect on the ideas presented. 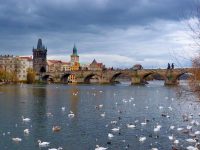 EQAR members convened for their 2nd General Assembly on 25 March 2009 in Praha, Czech Republic. The meeting was held on the day before the Bologna Follow-Up Group (BFUG) met, also in Praha, to prepare the next Bologna Process ministerial meeting, which will be held this April in Leuven and Louvain-La-Neuve.

The General Assembly discussed EQAR’s first annual report. The report, covering EQAR’s activities in 2008 from its founding to the inclusion of the first agencies on the register, will be published when Europe’s ministers of higher education meet in April to take stock of progress in the Bologna Process.

Following the end of her mandate in the European Students’ Union (ESU) last year, Anne Mikkola, who had served as Vice-President of the Executive Board since EQAR’s founding, had resigned from her post to allow a new representative of ESU to take over. The General Assembly by-elected Bruno Carapinha, a member of the ESU Executive Committee.

Bruno will also take over as President of the Executive Board from 1 April 2009, following an agreement to rotate functions annually amongst the representatives of EQAR’s four Founding Members. The General Assembly thanked Anne for her work and wished Bruno a successful mandate. Lesley Wilson, who has been its President since March 2008, will continue to serve on the Board as the Treasurer. Emmi Helle and Andreas Orphanides will serve as Vice-Presidents for the coming year.